skip to main | skip to sidebar

Since I want to strip the car down to bare metal, I decided to remove the two pieces that help hold the wing in place, and the window lock. They are held in place by two screws. In this case, I ended up drilling out a screw on both of these because time and rust had made them extremely hard to remove. Of course being phillips heads, they also just stripped out. 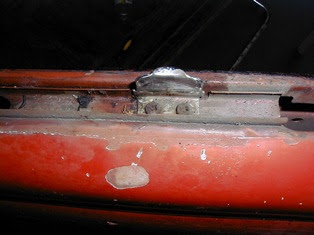 The last piece is the door handle. This is quite simple. There are two screws on the end of the door. Remove these. 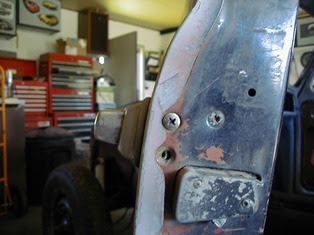 and push the door handle towards the front of the car. It then is easy to remove. 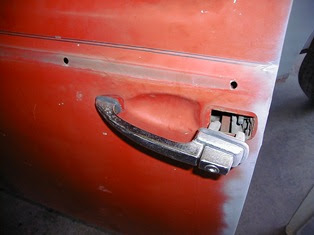 Make sure you bag and tag EVERYTHING when you are working on things like this. You may think your memory is good enough to know where everything goes, but I wouldn't plan on it.
Posted by Ed at 1:00 PM No comments:

After removing the side glass, next is to remove door rubber and the wing.

The inner door rubber is clipped in and can be removed by un-clipping the retainers. 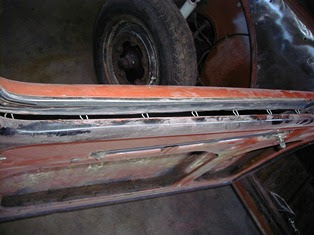 Next - pull the large window channel out. In this case, there were a couple of small screws that were hidden in the upper piece. These need to be removed. Part of the chrome also stuck to the channel as I pulled it out. 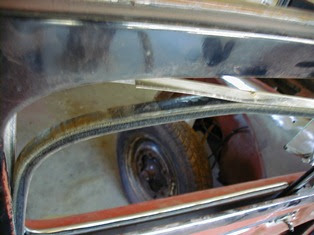 The outer seal is held in place by clips as well. Just pop these out - and the chrome piece will come out along with the seal. 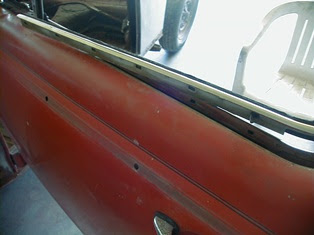 The wing and inner door glass channel is held in place by screws on the top of the door frame. Remove these and you can remove the inner window channel. 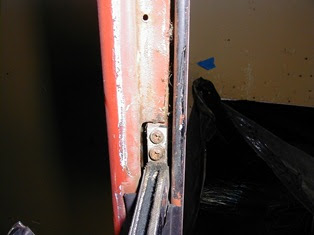 In order to remove the wing, you need to remove the rivet that holds the top of the wing in place. I used my Dremel to just grind down the bottom of the rivet. 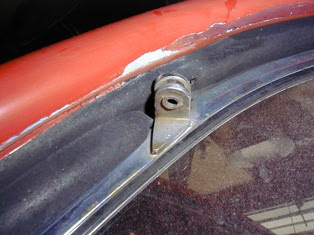 Before you can disconnect the rivet, you also need to remove the bottom clamp that holds the wing in place. This is held in place by two bolts. 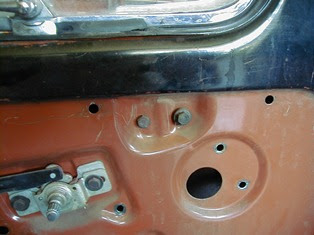 Make sure to notice that one side of the clamp has more than one washer. This is to adjust the amount of tension on the wing so it can be opened and stay in position. 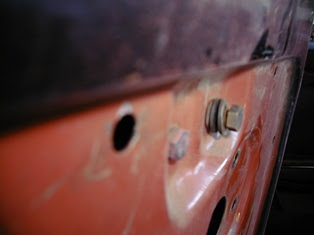 Once the clamp has been loosened, you can push up the rivet with a punch. 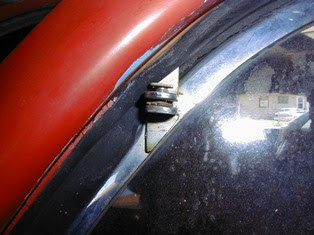 And separate the the wing from the mount. 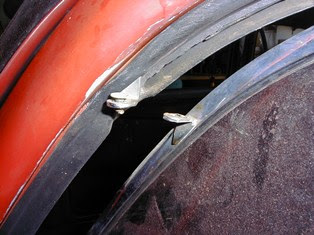 The clamp will probably fall out. It is in two pieces, and I thought I would take a picture of it to show you how it goes together. 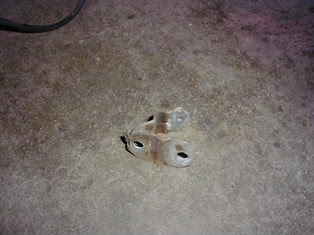 Once the wing is removed, you can remove the rubber around the wing. In this case, it looks like the rubber is truly 50 years old. 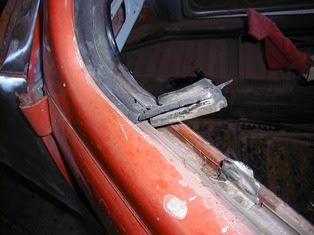 Next, you need to remove the mechanism that raises and lowers the window. This is held in place by four bolts: 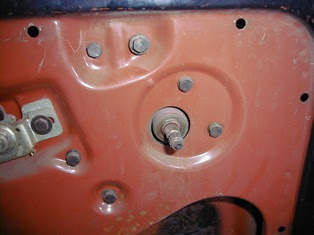 Once the bolts are removed, the unit drops down: 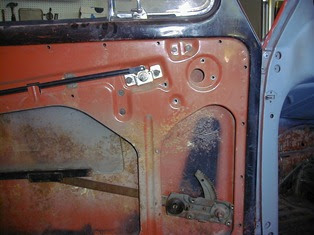 And then it can be disconnected from the window glass and removed. 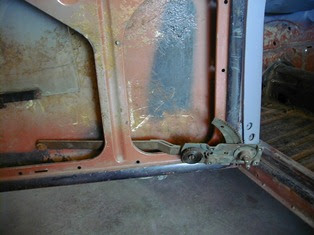 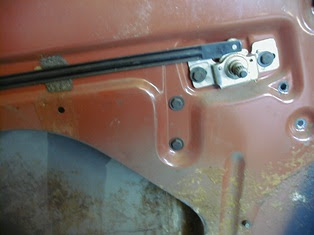 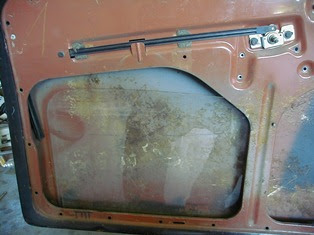 Getting to bare metal

I knew it was going to take some time - but I'm slowly getting the body of "Ruby" back to her base of shiny metal. The majority of the work is with a sander and drill with a paint stripper pad. 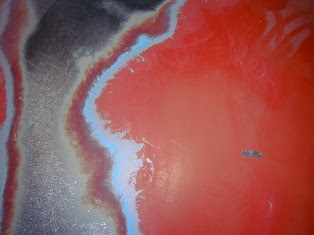 As I indicated before - three layers of paint can be a bit much. Just time, patience and things are coming together. 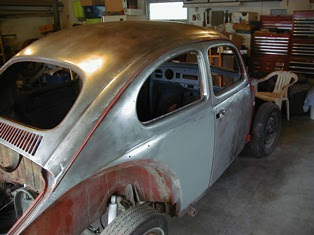 Now all that is left is a bit on the back and the drivers side door. 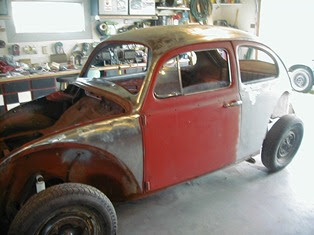 Soon I'll have the body stripped down. I am going to do a combination of lead filler and bondo. Should be interesting as I've never done much lead work except for soldering. I know I just need to take my time and go slow.
Posted by Ed at 6:49 PM No comments:

Besides the external areas, I also had to move to the inside of the car. I gutted the dash and started cleaning that area up as well. I guess a PO (previous owner) decided that black was a better color for the interior than the original red. Since I was repainting - I thought to return to the correct color inside and out.

This took a lot of work since the underside of the dash has a LOT or little bumps and dips. I used a liquid paint stripper to get to some of the harder to reach areas. Be careful when using this stuff and make sure it's well ventilated and you are wearing the proper clothes and gloves.

After a lot of hard work, I managed to get the old paint off and the base primer put on.

I also worked on the roof. When they put the roof rack on, it wasn't mounted correctly and dented all over the place.

Start on the body

Moving to the exterior I pulled out the windows. Since the rubber was probably original, I just cut it away. Low and behold that I found some rust under the drivers side window.

As I stripped off the paint, I found that poor Ruby had sustained some damage somewhere along the way and they had to pull out some dents. This could be why there was rust under the glass as it wasn't sealed properly.

The farther down I went - the more body putty I ran across. I guess it's to be expected in a 50 year old car. The bad part is that someone had put the putty on WAY too thick.

Considering that you shouldn't be any more than about a 1/4 inch, you can see it was a lot more than that. I cleaned everything up and pouned out the dents closer to where they should be.

Luckily the left side was a lot better and just needed to have the 3 layers of paint removed.

Cleaning up the floorpan

After work on the rear axle and transmission, I turned my attention to the floor pan. It took a while to clean out the years of dirt and muck but I managed to get it done. I was suprised that the pan was basically in good shape. In order to get to the metal, I had to chisel out the old tar board.

Fifty years had pretty much cemented the tarboard to the steel. It helped protect most of it, but the "valleys" had surface rust on them. I actually used a wood chisel to scrape it out with. Hard going, but it's done.

It's time to get some rust preventor from Eastwood before the new tar board goes down.

Of course I didn't completely luck out. There is the typical hole in the floor back by the battery that needs to be replaced. Luckily floor pans can be purchased in quarters so I don't have to get the whole thing.